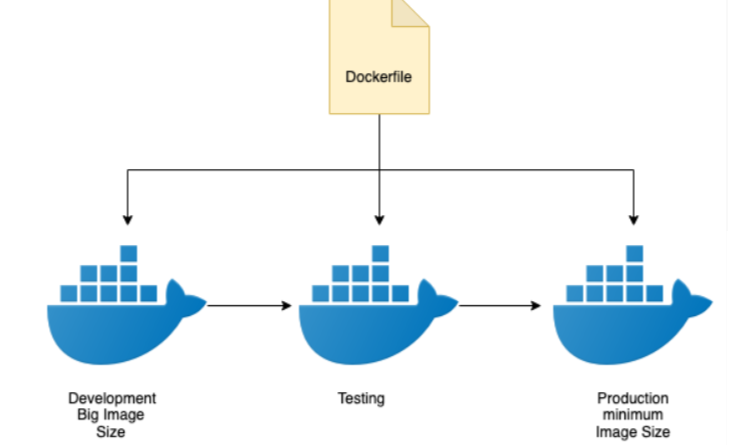 In the last article, we learned how to build a basic docker image using dockerfile. Today, let us look at the multi-stage build of docker and what problems it can solve.

With the release of version 17.05, Docker has also made an important update to the image building, which is multi-stage build. This is really helpful for the developers who have long been troubled by the image size.

Before version 17.05, when we built Docker images, we may face some troubles:

1. Writing all the build processes in the one Dockerfile, including the compiling, testing, and packaging libraries of the project and it would result in some problems:

2. A better way is to package the project and its dependent libraries externally beforehand, and then copy it to the build directory. Although this can well avoid the risk of the first method, it still needs to write two Dockerfile and some scripts to automatically integrate the two stages.

Here is a simple Java project as an example to show the process of building and this project only contains an Demo.java class:

Here, we write all the build processes in the same Dockerfile, but in order to reduce the image level as much as possible, we merge multiple execution commands into the same RUN instruction. At the same time, we have to clean up the source code file and temporary directory file and compile by ourselves.

Nevertheless, the container size built by this dockerfile will still be relatively large, so we have to continue to improve：

Here we divide the process into two stages:

Step 3: Create a shell script to integrate above two dockerfile:

Here we have written two Dockerfiles and a Shell script to build the final image in two stages, but if our projects are related to each other, then we need to maintain multiple dockerfiles in the shell script. If there are more projects, it will be troublesome to maintain.

Still the above example, let us see how to achieve it with multi-stage build:

The above Dockerfile just merges the two Dockerfiles into the one Dockerfile, and automatically completes the script in step3 process for us during the build process.

For multi-stage build, there are two key points:

1. An AS parameter is added after the FROM instruction in the previous stage, which can name the stage for easy reference in subsequent stages. The format is as follows:

2. The –from parameter is added after the COPY instruction in the subsequent phases, which is used to specify which results of the previous phase to refer to. Here is the format:

The multi-stage build can also easily build the container image from multiple dependent projects through one Dockerfile without worrying about the large size of an image and source code leakage.